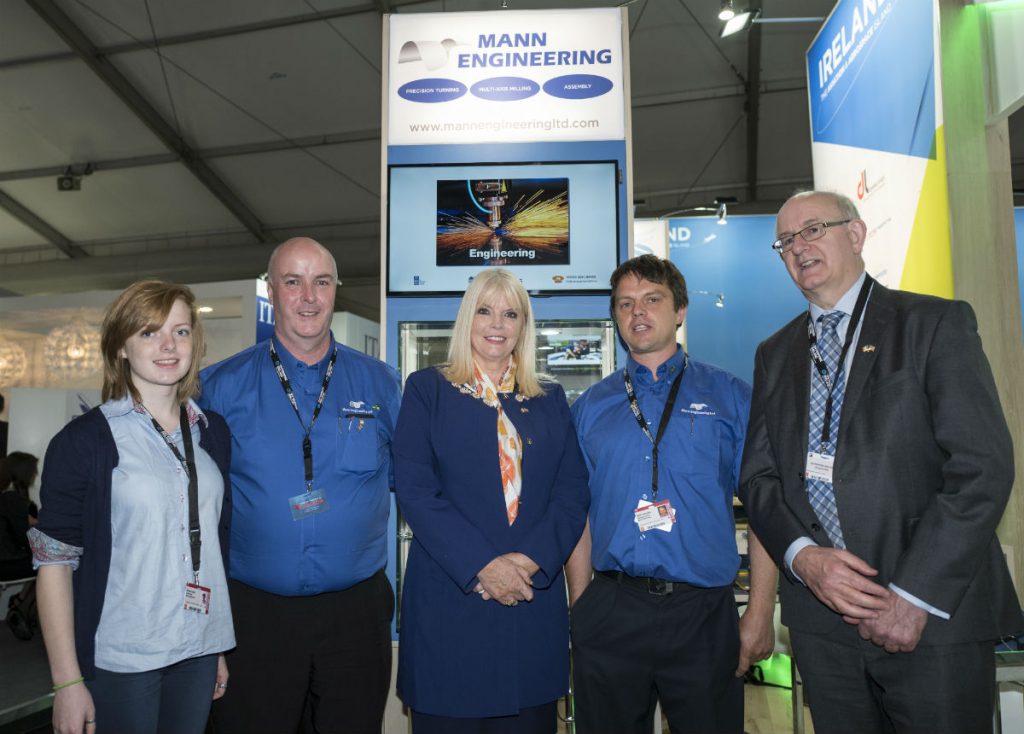 On Day 3 of the Farnborough International Airshow, New Minister for Jobs, Enterprise and Innovation, Mary Mitchell O’Connor visited the Mann Engineering stand on the Irish Pavillion.

The Minister was visiting the Irish Pavillion at the show to help promote the Irish aviation and aerospace sector. Following meetings with Mann Engineering and the other five companies displaying at the Irish Pavillion, the Minister went on to have high level and important meetings with the ADS group, Bombardier and also Airbus representatives. Later in the day the minister returned for a reception held in her honour at the Irish Pavillion which was attended by many leading figures from worldwide in the Aerospace community.Minister for Jobs, Enterprise and Innovation, Mary Mitchell O’Connor says, “There was approximately €185 billion-worth of business transacted at the last Farnborough event two years ago. I very much hope this week’s exhibitors can tap further into this market, deepening relationships with the likes of Airbus, Bombardier, Boeing, Rolls Royce and related supply chains.”She continued, “Ireland is a big player in this sector, for instance managing over 50 per cent of the world’s leased aircraft. Increasing our global presence in this market will drive exports and jobs at home.”

The Ministerial reception event, which was seen as one of the highlights of the Farnborough Air show was attended by over 200 people  and it allowed for the six Irish companies to network and promote their goods and services directly to potential clients.

There are over 250 companies active in the aviation and aerospace sector in Ireland contributing over €4.1 billion to GDP and supporting 42,000 jobs in Ireland. The majority of these companies are involved in Leasing and MRO. Ireland is responsible for leasing over 50% of the worlds aircraft. Companies such as Mann Engineering is an emerging precision machining company entering the Aerospace supply chain network, a worldwide market worth over $5.2 trillion. At present both Boeing and Airbus as nearly 10 years behind on their build schedules, mainly due to the supply chain not being able to keep up. At present Boeing produce over 33 finished aircraft per month and Airbus over 50 per month.To give an indication of the type of figures involved Airbus announced at the show that they had sold 279 aircraft totalling €31.6 billion. One of these orders was from Virgin Atlantic president Sir Richard Branson, who visited the air show to announce a €3.97 billion order for 12 Airbus A350-1000 aircraft. As well as this Boeing announced that they had secured orders for 182 commercial aircraft totalling €24.2 billion.
<>
News
We use cookies to ensure that we give you the best experience on our website. If you continue to use this site we will assume that you are happy with it. Thank you,OKPrivacy policy